Courchevel Airport (Altiport) high up in the French Alps has enjoyed a busy winter. 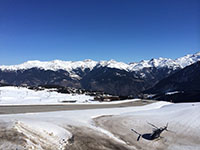 The 53-year old aerodrome with its 2,006m runway regularly hosted 50-seat Dash 7s during the 1992 Olympics.  Today its 70 daily movements (December to April) are mainly King Air 350/200 turboprops, varieties of Cessna pistons and varied helicopters.   Helis account for 60% of movements.


During BTN's visit JetFly, the Luxembourg-based fractional ownership company specialising in single-engined Pilatus PC-12s had three movements booked in, although JetFly UK owners have to clear customs in France.   Yves Chapuis, General Manager, confirms that the upturrn in activity from Europe and Russia especially (one family flew in a Robinson R66 with several stops) has called for the building of a proper Fixed Base Operation (FBO) with dedicated passenger and pilot lounges.  Courchevel Altiport, as featured in the James Bond film Tomorrow Never Dies, is one of the most challenging airports in the world with its 18.5 degree gradient, upslope runway and busy ski runs alongside.


Landing fees are free in the spring and autumn, says Yves, but nothing can beat sitting in the sunshine in the Pilatus Restaurant, hot chocolate in hand and a ski down Courchevel 1850.