Air Canada is modernising its international fleet with the introduction of new Boeing 787 Dreamliner aircraft. At the same time it is debuting a brand new international interior and introducing three cabins of service. 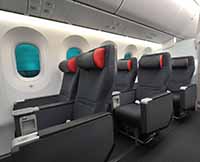 Economy and International Business, which offers 180-degree lie-flat, and will be joined by Premium Economy which aims to provide a high-value option for enhanced comfort.

Air Canada currently fly eight 787-8 Dreamliners and will take delivery of 15 Boeing 787-8, and 22 of the larger capacity Boeing 787-9 aircraft with delivery scheduled for the end of 2019.

Air Canada has recently announced that along with the addition of two new Boeing 777-300ER aircraft to its wide-body fleet, it will extend the three-cabin international product to all 25 Boeing 777-300ER and 777-200LR aircraft, consistent with the new Boeing 787 design. Conversion of Air Canada’s 777 aircraft is planned to be completed by the second half of 2016. The airline is currently operating a refitted wide-body 777 aircraft on the London – Vancouver route, featuring the new Premium Economy cabin, and will deploy it on the London – Montreal route during the summer 2015 season. www.aircanada.com