Ryanair is to become the first scheduled user of Castellón-Costa Azahar Airport on the Mediterranean coast of Spain, 50 miles north of Valencia.  Flights will link the airport to Stansted three-times-weekly and Bristol twice-weekly from September this year. 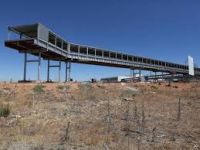 The airport was officially declared "open" by local authorities in March 2011 despite having no airlines signed up to land there, nor government approval to operate.   It was commissioned by the then-head of Castellón province, Carlos Fabra, a long-standing member of Spain's ruling People's Party (PP) who is now serving time in prison for tax fraud.

The airport was one of many grand building projects – including a Sydney-style opera house and Europe's largest aquarium – carried out by the region of Valencia during Spain's boom years before the 2008 crash plunged the country into its worst recession of modern times.

The airport served its first commercial flight in January this year, a charter flight from Air Nostrum carrying local football team Villareal to a match in northern Spain.

On paper the Castellón airfield looks an attractive proposition supporting a holiday region with no other competing airports.  There is a single 2,700m runway which can be relatively easily certificated.  www.aerocas.com   www.ryanair.com

Valencia isn't a competing airport? Neither Girona nor Reus doing well vs. Barcelona these days and they are further away.