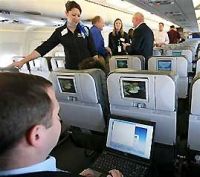 SOUTHWEST AIRLINES, the world’s largest airline in terms of passengers carried, says it plans to begin a fleet-wide rollout of Wi-Fi internet in the 2010 first quarter.  The budget carrier, whose concept has been much copied around the globe, says it "has received fantastic customer feedback" from passengers who have used an experimental system on four 737s on which it has been tested since February. "We have concluded our testing for in-flight Wi-Fi and are very happy with both the technical performance of the system and the response of customers who have used it," Senior VP-Marketing and Revenue Management Dave Ridley said.  During the testing phase, passengers with their own laptops or other Wi-Fi enabled devices used the service to send and read e-mails as well as surf the internet. Pricing has yet to be confirmed. www.southwest.com