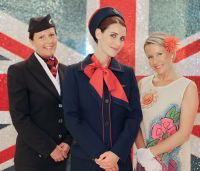 BRITISH AIRWAYS has celebrated what it calls its 90th anniversary using TV personality Kirsty Gallacher to model a bright 1974 BOAC ensemble together with other models wearing the rather dull looking current uniform and a paper dress vintage BEA 1967.  BA used the opportunity to assemble ‘90 facts from 90 years’ of British Airways, worthy in a misleading way as anything put out by a well known Dublin-based air carrier.  What cannot be denied was that the very first scheduled international flight departed from London (Hounslow Aerodrome) to Paris (Le Bourget) on 25 August 1919.  The fare was 42 guineas (£44.10 – or £1,706 in today’s money).  In 1936 an operator called British Airways was created flying to the low countries and this became part of Imperial Airways in 1939.  British Airways as an entity was formed in 1974 by merging BEA (British European Airways) and BOAC (British Overseas Airways Corporation) and privatised ten years later. http://www.ba.com