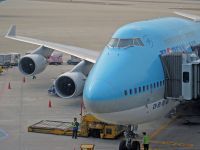 KOREAN AIR has been brave and is forecasting an increase in international passenger traffic in September.  The airline said the average number of reserved seats on international routes for the month is up 21% from the same period last year whereas overall supply of seats has increased 9%.  Japan has seen the biggest increase in demand for seats at 59%, followed by Americas at 12%, Europe 10%, Southeast Asia 7% and Oceania 6%.  Demand for seats to China in the month of September is flat from last year.  The airline says the numbers of both business and leisure travellers have been increasing since July as the world economy began to stabilise.  Overall international passenger traffic rose 5% and 9% in July and August, respectively, from that of last year.  An easing in concerns surrounding the H1N1 influenza virus also helped rekindle demand for air travel. www.koreanair.com