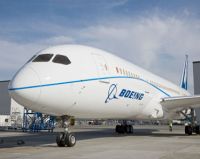 BOEING has officially confirmed that the maiden flight of the much delayed 787 Dreamliner is expected by the end of 2009 and the initial customer delivery is planned for the fourth quarter of 2010.  This comes after rumour and counter rumour emanating from Seattle and also component suppliers from around the world.  What is firm is that ANA were supposed to have taken first delivery in May 2008 prior to the Beijing Olympics and that Boeing had run into trouble concerning the bonding of the wing joints.  Whether this was known prior to the spectacular roll out in July 2008 is surrounded by controversy but it is likely that heads will roll at Boeing with Programme Director Mike Blair already moved sideways and replaced in a slightly different role by the genial Scott Carson.  Firm orders for the 787 stand at 850. www.boeing.com