No dividend at Lufthansa

Lufthansa says it will not pay a dividend for 2014, conserving cash for restructuring, after its net result was hit by the sale of an IT unit, an increase in pension liabilities and losses from fuel-hedging activities.

It noted pilot strikes in November and December had cost it an additional €62m, taking the total amount of operating profit lost to strikes over the course of last year to €232m. 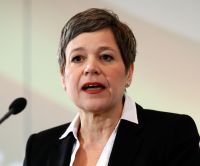 Chief Financial Officer Simone Menne said on a call with journalists that the airline, which has €32bn worth of planes on order, was constantly reviewing investments but there were currently no order cancellations on the cards.

She said Lufthansa was working towards restoring a dividend, highlighting that the negative hit to 2014 earnings was somewhat exceptional in nature.

While the company had to take provisions for its hedging options as per the year-end, she said that overall its hedging policy has a positive impact.

Echoing comments from rival Air France-KLM, Menne said some of the benefits of lower fuel costs in 2015 would be eroded by lower ticket prices, though she was unable to say by how much.

Lufthansa is due to publish full 2014 results on 12 March.   www.lufhansa.com