Whilst no news has been released concerning possible upgrades for its 10-strong A380 fleet (all delivered) Korean Air has revealed its revamped executive class on the A330-300 equipped with new ‘Prestige Suites’.

The first aircraft with the new product have made their debut on the Seoul – Guangzhou, Singapore and Hanoi routes.

The ‘Prestige Suites’ optimise the allocated space to provide customers with the ultimate in comfort and space, whilst at the same time offering privacy if required.  The innovative armrest automatically slides down out of sight when the seat is in fully flat bed-mode and allows the seat to have an increased width of 22.5 inches, against the previous 21 inches.

Privacy panels are installed between the seats, with those in aisle seats able to rise higher for increased privacy.  Each seat is also equipped with an ottoman, where passengers can rest their feet, or work colleagues or family members can sit to chat.  These ottomans are more often seen in the First Class cabins of other airlines.

More enhancements are promised for later in the year.  Maybe the A380?   www.koreanair.com

Plus a special AND FINALLY

Further to our recent AND FINALLY  (See BTN 5 January) Heather Cho, daughter of the airline's Vice President, has been jailed for one year following “The great nut incident”.

BTN thinks the sentence is about right but a tag should have been added forcing the lady in future to fly only Economy Class in a middle seat.

BTN has not travelled with Korean Airlines but we believe that nuts, in the usual style wrapping, are served in the rear cabin.  She will not miss out on what is clearly her favourite food. 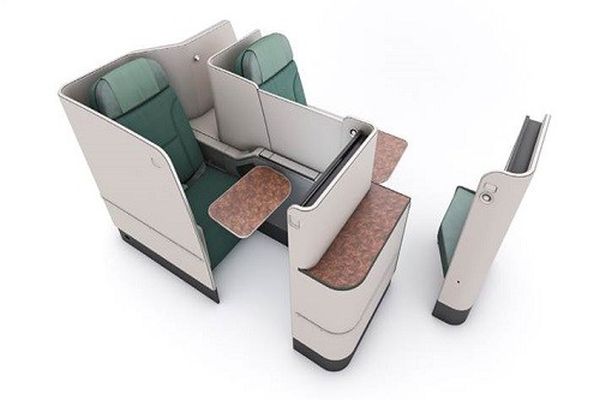