The US Air Force will use Boeing's 747-8 airliner to replace its current fleet of two presidential aircraft, one of the most visible symbols of the United States.  The aircraft, when delivered, perhaps in 2017, could be the last of 1,540 delivered since Pan American Airlines took its first plane into service in January 1970. 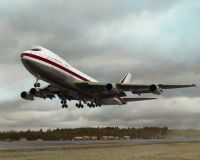 The decision comes a month after Boeing said it would slow production of the four-engined 747-8 aircraft to 1.3 a month from 1.5 a month because of declining orders.

"The Boeing 747-8 is the only aircraft manufactured in the United States (that) when fully missionized meets the necessary capabilities established to execute the presidential support mission," said Air Force Secretary Deborah James in a statement.

Boeing welcomed the Air Force's decision to skip a competition and opt for the 747-8, citing its 50-year history of building presidential aircraft.

The Air Force said it intended to award a sole source contract to Boeing, but they must still negotiate a contract and the modifications needed to adapt the jet for presidential use.