A new app for people who are nervous about flying will help calm their nerves – by giving them statistics on how unlikely it is their aircraft will crash.  Called ‘Am I going down?’ the app is designed for iPhone and iPad users and is now in the iTunes app store. 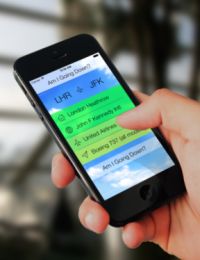 Fear of flying is very common.  In the UK it is thought as many as one in five people experience anxiety about flying at some time.  In the US a study by Boeing researchers found that 18% of adults were afraid to fly.  Famous sufferers have included footballer Dennis Bergkamp, actress and MP Glenda Jackson, boxer Mohammed Ali and former President Ronald Regan.

The app was written by husband and wife developer team Nic Johns and Julie Postlethwaite.

“The simple fact is that flights are incredibly safe,” says Nic Johns, “invariably in the millions to one range, but it’s more useful to someone who is a nervous flyer to know the past performance for their type of aircraft and their particular journey, rather than just generic figures.”

Currently the app is available only on iPhone and iPad and Johns says that developing an Android version is “definitely a possibility for the future.”