Jim McNerney, Chairman and CEO of Boeing, has announced the passing of Bill Boeing, Jr (92).

“Bill’s impact on the social and economic development of the Puget Sound has greatly benefited generations in the community. 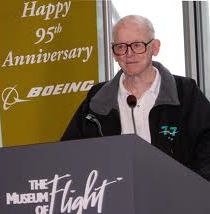 “We are especially grateful for his efforts to preserve our largest home community’s history of aerospace innovation by helping secure and renew the legendary Red Barn, our first factory, a special place that he visited as a boy.  Then, as a leading light in the creation and expansion of the Museum of Flight, he helped showcase our heritage and inspire generations to join in and further advance the science and business of aerospace.

“As a successful businessman and a model for citizenship, Bill positively shaped the region around Seattle, not least through his family support for the Seattle Children’s Hospital, and all the while sharing his passion for education and history wherever he could.

William Edward Boeing founded the aircraft company bearing his name (called originally Pacific Aero Products) in 1916 and was forced to relinquish control in 1934 by the US government, effectively retiring.  He died in 1956 aged 74.