It is amazing to think that Etihad Airways was only formally established in July 2003 and commenced operations in November of that year.  Today it is one of the world’s major airlines, award winning with a very modern fleet of just over 100 aircraft, which will at least double by the end of the decade.

In December 2014 Etihad took delivery of its initial Airbus A380, incorporating “The Residence by Etihad”, becoming the only airline in the world to offer a pair of private suites on a normal scheduled flight.  At the unveiling ceremony it was joined by the first Boeing 787-9 Dreamliner for a Middle East carrier.  Etihad is clearly going places. (see “Etihad arrivals” in this issue). 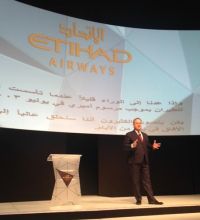 The word ‘Etihad’ in Arabic can be translated as ‘unity’.   Etihad Airlines is the official airline of the United Arab Emirates.

In charge since 2006 as President and Chief Executive Officer is James Hogan, an affable Melbourne-born Australian whose career path has included senior spells at the then British Midland Airways, Hertz, Forte Hotels, and a four-year spell running Bahrain’s long-established Gulf Airlines before moving on to Etihad.

Whilst the 2014 Etihad passenger figures have not yet been published, for the third quarter it carried 30% more than in the same period the previous year, indicating that the grand total could reach towards 15m for the last 12 months (2013 11.5m).  Etihad now flies to 111 destinations from Abu Dhabi.  Over the last decade it has also invested in Air Berlin, Aer Lingus, Air Seychelles, Air Serbia, Alitalia, Etihad Regional (Darwin Airways), Jet Airways of India and Virgin Australia.

Etihad’s first A380 made its debut on the Heathrow route on 27 December 2014 with the plan to offer all three of its daily services with that aircraft by the summer.  The Sydney and New York JFK routes will follow this year by which time five A380s will have been delivered.  Mr Hogan has said emphatically at the introduction that the airline will not increase its current order for 10 of the Airbus giant.  The first Dreamliner goes on the Dusseldorf route from 1 February.

The airline’s financial results for 2014 are expected to be announced in March and should easily exceed the previous year’s figures of US$62m, up from US$42m in 2012. 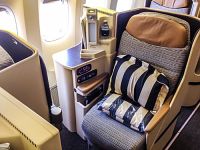 For the coming months as a passenger on the airline’s Heathrow to Abu Dhabi route do not get alarmed that an A380 is not flying your service.  The current Boeing 777-300 operation is very, very good and in fact is slightly quicker than the Airbus.  There are also just 40 passengers in the two-cabin Pearl Business Class as against 70 in the larger aircraft, although this has a very fine lounge area, bound to become popular with regular travellers.  For the A380, book a seat at the front of the Business Class cabin.  The lounge sits between First and Business Class.

Etihad flies from Heathrow T4, thought by many people to now be the best terminal on the airport, if only because it is the least busy.  If you are coming by train the Heathrow Connect service from Paddington (and the central area) is every 15 minutes.  And likewise the Piccadilly Line also.  Transport for London (TfL) needs to increase the frequency for the Tube, which is frustrating for regular Underground users, used to a train every few minutes.  Etihad Premier Class passengers within 100 miles of Heathrow or Manchester airports can take advantage of the airline’s courtesy chauffeur service.  Manchester is twice daily and being highly promoted via the renamed Commonwealth Games stadium (now being extended) and the current Premier League champions soccer club. 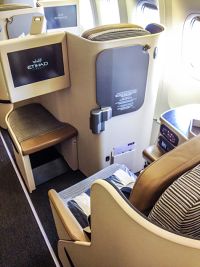 For the time being, whilst its A380 accommodating lounge is being built, Etihad uses the excellent Gulf Air Falcon Gold facility, with its large panoramic windows overlooking the apron at T4.  We are promised something special with the Etihad salon but there is nothing wrong with what Gulf offers.  You can dine before your flight, there are shower facilities and well-furnished family rooms.  Both Etihad and Gulf Air offer very comprehensive bar services on the ground and in the air and the normal list of special meals is available in all classes by pre-booking.

Watching from the lounge we saw the inbound aircraft arriving on time.  We arrived at Abu Dhabi slightly early.  Sad to say Heathrow put us on hold on the way back and if you are landing on the northerly runway it is a long taxi to the gate!  Perhaps I am being critical as a London City regular used to being landside in less than 10 minutes of landing.  In any event T4 Border Control was very quick and with cabin baggage only I was away quickly.  At Abu Dhabi Premier Class passengers can use the ‘Fast Track’ facility and for UK passport holders no visa is required, a cursory glance at your paperwork the only formality.  Abu Dhabi Airport offers a range of pre-booked assistance if required.

Passengers flying at the front have a dedicated air bridge for boarding and once in the Pearl Business Class cabin my jacket was quickly stored away by a stewardess.  Champagne or orange juice was offered but as sometimes is the case a ‘bucks fizz’ or ‘mimosa’ seem to defeat the staff and it is a question of asking for both and going self-service.

The cabin is 1+2+1 with the single seats alternating at the window.  These current Etihad seats (an upgrade is promised to match the A380/B787) can be fully flat, have simple controls, and are very comfortable.  There is plenty of storage space and you are in effect in a mini-suite, equal if not better, than First on most airlines.  There is no lounge bar on board but you can take a walk all around the aircraft, unlike American carriers who insist that you do not move from your allocated cabin.  The A380 and 787 offerings seen at the aircraft unveiling are an improvement on a very good product.

The 15” Panasonic back-of-seat TV screen is one of the easiest to use, and features on-board cameras for both forward and underneath views (great for take-off) and a very good selection of live TV, films and games.  Sadly I watched the terrible Pakistan Peshawar school tragedy unfurl.

Etihad also offers in-flight wi-fi, easily the quickest I have come across on a variety of carriers and operating at the same speed as the system in the BTN office.  The cost is US$12 for two hours, easily sufficient for my needs.  The TV hand control tells the passenger how long to landing.  I logged in with 150 minutes to go which gave plenty of time to update on emails and take in some research. 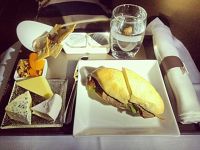 When it comes to dining one eats to suit oneself.  It is officially a three-course offering (with a choice of four main dishes) plus cheese, but the soup (white bean soup, crème fraiche with chive) looked interesting, and requested.  It was delicious and served nicely hot.  Four courses plus cheese for yours truly, perhaps a little too indulgent. There was plenty of choice and of course an Arabic mezze to begin with if wanted.  My starter was salmon terrine with avocado, lime scented cream and dressing with the main course grilled sea bass with sautéed vegetables, roast potatoes and lemon butter, and ice cream followed for me.

A Macon-Verze, Domaine Leflaive, Chardonnay, 2011 was followed by port (and a sleep).  Towards the end of the flight, whilst working on the laptop, there was plenty of room to take in the ‘kitchen anytime’ menu which included toasted focaccia filled with roasted chicken and mustard mayonnaise.  As fine an airline meal in Business Class as you could wish for. 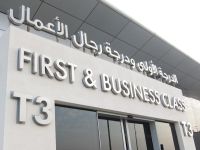 Readers flying direct to Dallas, Chicago, New York (JFK) and Washington might note the airline-sponsored United States Customs and Border Protection (CBP) facility at Terminal 3 in Abu Dhabi Airport, a purpose-built facility that allows US-bound passengers to undertake all immigration, customs and agriculture inspections prior to departure.  It is for all intents and purposes the same as that offered in Dublin and Shannon for US flights, arriving in the United States as if on a domestic (or Canadian) flight.

If you are flying with children, Etihad provides a Flying Nanny service to provide an extra pair of hands – whether it is helping to get the youngsters settled for bed, keeping them entertained or simply offering advice and support to parents.  British trained, they are equipped with a goody bag of games and activities to help keep the kids occupied, easing the pressure.  The service cannot take the kids completely off your hands, but it does make life easier particularly if it is a mum either leaving or joining a partner working in the UAE.

With 80% of passengers connecting and strong competition from at least two airlines in the region Etihad has from day one strived to lead the pack.  The current 777 Business Class offering is very good.  It is spacious and offers a caring international staff.  A brief look at the new cabins in Abu Dhabi promises even more.  www.etihad.com/en-gb/experience-etihad/on-board/business-class 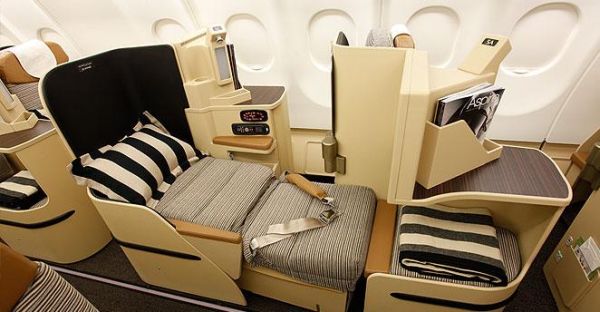