Tucked away in the Chancellor’s Autumn Statement (see APD) was an announcement that the Government plans to press ahead with a scheme to introduce signs on motorways that display the price of fuel at service stations, to help promote competition and lower fuel prices.

The Department for Transport will begin work early next year on trialling a new fuel comparison sign at five service stations on the M5 between Bristol and Exeter, with a view to introducing the signs by the end of 2015.

Transport Minister Robert Goodwill said: “For too long drivers have been ripped off by petrol prices on motorways.  This Government wants to support the hardworking people of Britain and build a fairer society.  Today’s announcement will ensure people can see the cheapest places to fill up, encouraging greater competition between service stations.

The trial follows a report by the Office of Fair Trading (OFT) which called for more public information on UK petrol and diesel prices.  The OFT found fuel sold at motorway stations was on average 7.5p per litre more expensive for petrol, and 8.3p per litre for diesel, than the rest of the country.

Five service stations on the Bristol to Exeter stretch of the M5 have agreed in principle to be involved in the trial.  www.gov.uk/government/news/petrol-price-signs-on-motorways 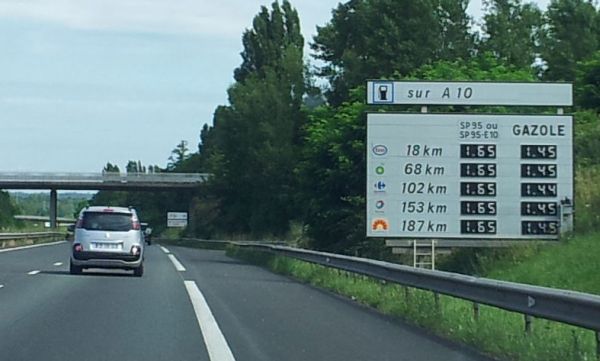