Manchester Airport is flying high after being crowned UK Airport of the Year at the annual Airport Operators Association (AOA) awards last week.

Winning in the passengers over six million category, the UK’s third largest airport was up against airports including Heathrow, Gatwick and Birmingham, and received the accolade due to a phenomenal year of growth, increased destination choice and infrastructure investment. 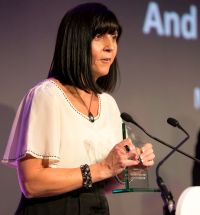 Andrew Cowan, Chief Operating Officer for Manchester Airports Group (M.A.G) said: “It has been an incredibly successful year at Manchester Airport and we hope to soon see passenger numbers back over 22m – a symbolic figure we’ve not seen since 2007.

“Over the last 12 months we have significantly grown, not just from a passenger point of view but from a destination perspective.  This year we confirmed a direct route to Hong Kong, with Cathay Pacific, which will make Manchester the only airport outside of London with a direct non-stop service to China.  As well as adding more routes we also continue to develop and invest in the airport, including rapidly progressing our £800m Airport City project and connecting the airport to the region’s tramway, a feat we achieved with Metrolink over a year ahead of schedule.”