KLM has said goodbye to the McDonnell Douglas MD-11 with three special farewell flights over the Netherlands.

Those in attendance were given one last chance to enjoy their favourite aircraft, 200 built, with tickets for the exclusive flights having sold out in minutes upon first release.

The last MD-11 flight also marked the end of a remarkable era in civil aviation, with KLM remaining the last airline in the world to deploy the MD-11, with the partnership between manufacturer Douglas and KLM having lasted more than 80 years.

KLM remains the only airline in the world to have operated every series-built aircraft type built by Douglas, from the DC-2 through to the DC-10, from 1934 to the present day including the forgotten DC-5.  The MD-11 is succeeded by the Boeing 787-9 Dreamliner in 2015.  This can carry 294 passengers, generates fuel savings of around 30%, and produces a lot less noise and CO2 emissions.

The MD-11 was a direct development of the DC-10. That aircraft saw its last passenger flight earlier this year with Biman Bangladesh out of Birmingham Airport.  www.klm.com 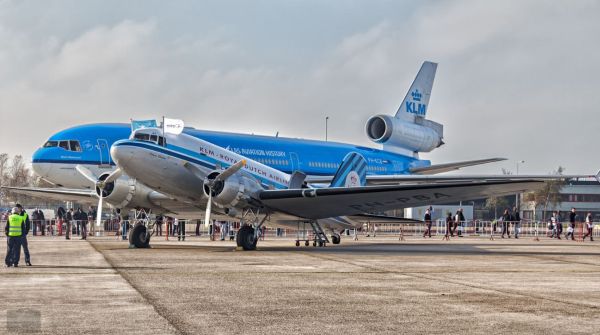