Emirates and the US

Now claiming to be the world’s largest long haul airline Emirates will have 68 A380s in operation by the end of 2015 compared with the current 55.  In total it has taken 140 of the 312 firm commitments that Airbus has for the Super Jumbo in two configurations with either 489 or 517 seats.  In all just under 150 A380s have been delivered to 12 airlines. 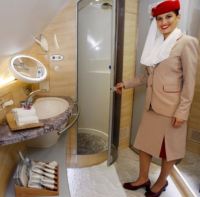 Emirates switched to A380s on its Dallas route on 1 October and will upgrade San Francisco and Houston flights in December.  Other US destinations are expected to follow in 2015.

In the United States a big impact has been made by Emirates with passengers to and from the Middle East now able to fly non-stop between Dubai and nine major American cities.

The move to A380s on services established using the smaller Boeing 777s will test US and European carriers that have dominated transatlantic flying for decades.  Emirates includes onward services to many points in India and further to the East.  www.emirates.com