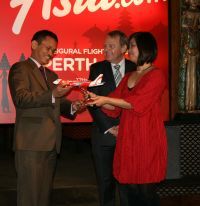 AIRASIA, based in Kuala Lumpur (KUL) (Malaysia), has delayed the delivery of eight Airbus A320 series aircraft for up to four years (in effect 2014), citing the current "infrastructural constraints" at KUL, a reference to the delay in the construction of a low cost terminal at the airport.  The airline has a target of 175 of the short to medium range aircraft by 2015.  Its long haul division, AirAsia X, also hubs at KUL and operates daily A330 services to Stansted with connections to a variety of South East Asia destinations and also Perth and Melbourne (Australia). www.airasia.com