Spanish airline Vueling, part of IAG and a sister company to both BA and Iberia, is to introduce services next summer from Belfast City Airport, Birmingham and Dublin to Barcelona where it is the largest airline with 40% of passengers.

Vueling already operates to Barcelona from Cardiff, Edinburgh and Gatwick.  From the end of the winter season, March 2015, it hands over its Heathrow – Bilbao flights to British Airways and will from then onwards serve the northern Spanish city from Gatwick. 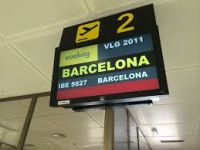 Belfast will see Vueling’s 180-seat Airbus 320s operating from Saturday 3 May and also every Thursday.  Flight time is around 2hrs 30mins.  The Birmingham service will operate on a Monday, Friday and Sunday.  With Dublin, Vueling competes head on with both Aer Lingus and Ryanair for the summer season with six flights per week.

Vueling will add a further 14 Airbus A320 series aircraft for summer 2015 giving a total of 104 planes.  This will allow the company to grow 19% in all its markets next year. In a year when Spain beat its record for tourist arrivals, Vueling has carried one in three passengers (33%) on domestic flights. The airline says that 44% of its clients are travelling for business.  www.vueling.com