Boeing has officially sketched out plans to develop an all-new narrow bodied aircraft, with innovative engines and likely, a composite structure.  But if you are a chief executive reading BTN do not rush to Chicago with your cheque book.  “New Generation 737s are still coming off the single Seattle line and there is the whole production of the MAX to consider. 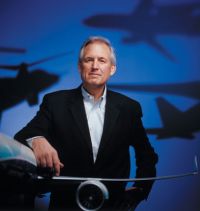 According to Jim McNerney, CEO of Boeing, the aircraft will be slightly larger than the 737 but its shape will not change dramatically from the current fuselage.  The push for the new aircraft was being driven by competition from China and elsewhere, he said at an innovation summit.

“By 2030 we will have a new airplane,” adding, “There’s a good chance it will be a composite airplane.”

Chinese planemaker COMAC is developing the C919 jet to compete with the 737 and the Airbus A320.  The jet has been delayed until end-2015.

Other competitors include Russia’s MS-21 and the slightly smaller Bombardier CSeries from Canada.

McNerney said that an all-new 737 MAX replacement was needed “because the new entrants would do something like MAX.”

The Boeing 737 first entered airline service with Lufthansa in 1968.  Currently 8,224 have been delivered, with 4,033 forward orders.  www.boeing.com/commercial