Flybe began new services on 27 October from Aberdeen, Dublin, Belfast City, Edinburgh, Exeter and Inverness to London City (LCY).  The timing could not be better with the regional travel trade converging on the nearby Excel Exhibition Centre last week.

The opening of five new schedules in one day must be something of a record and so Business Travel News sent regular contributor ‘inveterate air traveller’, Brother Michael Bartlett, down to Exeter to be on the inaugural LCY flight from Flybe’s headquarters.  Michael holds the Guinness World Record for the fastest circumnavigation of the globe using scheduled flights with a single airline – his time 59hrs 58mins with Air New Zealand 21-24 November 2006.

FASTER THAN ROAD OR RAIL!

So goes the new Flybe slogan to be found on either side of the engine covers of the airline’s Q400 Dash 8 aircraft. 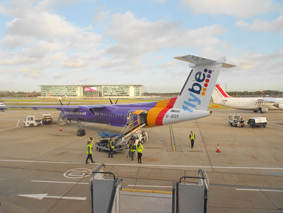 What could be more tempting to that ‘inveterate air traveller’, Brother Michael Bartlett, when he learned of the new scheduled services (beginning last Monday 27 October), than to seek opportunity for travel with Flybe?  His hope was to fly a few sectors of their new services.

Michael was invited to be aboard the inaugural flight from Clyst Honiton Airport, Exeter, the main base of Flybe, to London City Airport.  In order to be at the airport in time for the 06:35 flight (BE 1301), he travelled down the previous day, by train from London Paddington to Exeter St David, taking 2¾ hours!  The latter part of that Sunday afternoon was spent exploring the airport, taking photographs of some aircraft being serviced and the statue at the entrance. 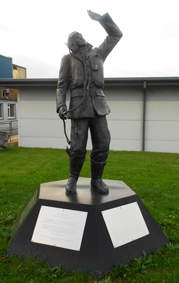 For the Devonshire or London business man or woman needing a return to base at the end of their working day, the schedules for travel between Exeter and London City appear good, travel in either case permitting an eight-hour working day.

For those needing an overnight stay at Exeter, there is an excellent hotel, Hampton by Hilton, which is no more than a 10-minute walk to or from the airport terminal.

Michael resisted a temptation to use the shuttle bus.  He walked to the terminal at 05:30 in the dark, there being no rain.

He discovered that the Hampton by Hilton hotel provided a most excellent library giving guests opportunity to browse through a variety of books.  The range of subjects was wide and varied, novels being both classical and modern.  There were books for children too.  On the wall are photographs of early planes belonging to both Scottish and Imperial Airways. These would be of obvious interest to many.

Under the title, REFUEL, to be found in an attractive booklet, Flybe offer a wide selection of snacks and liquids, ranging from the Early Bird breakfast for dawn flights to The Lunch and Light Lunch Box offerings for late morning travel.  The special Mediterranean Dinner Deal must be mentioned.  It is entitled The Tapas Special and includes Basil & Garlic Olives, Chorizo, Breadsticks, Fudges, Savoury Crackers, Houmous, Mediterranean Vegetable Pate and a minor Toblerone (for pud!).  All to be washed down with a Pimms! Buen Provecho. 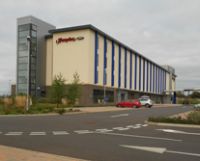 Brother Michael was not so daring and fasted for the flight to London City.  On a later flight to Edinburgh, he enjoyed The Bacon, Lettuce & Tomato Sandwich on white bloomer bread, taken from a Lunch Box.  On the south bound flight, being in need of moisture, the traveller treated himself to a cup of hot Tomato Soup (Heinz).  Of course tea, coffee, alcoholic and many soft drinks are all available from the trolley when brought through the cabin during the flight.

Michael speaks highly with regard to the comfort of the plane and, though he forgot to carry a tape measure with him, from experience concluded the seat pitch offered by Flybe to be greater than that installed by many airlines.  He could not see, as he walked up and down the aisle, any one kneeing the passenger in front!  There appeared to be reasonable leg room.  On no occasion during his five flights of the day was he hit in the back, hence his good marks for comfort.  He did wonder as to how any tall and/or large person managed in the ‘tiny’ toilet at the front of the aircraft? – but did not have the courage to enquire from the six foot over weight passenger to be seen on Flight BE…. – he did not mention which flight!

Check-in at Exeter airport the day before travel was easy using a machine just inside the entrance.  It printed boarding cards for the first three of Michael’s five flights.  Michael saves tickets and boarding cards.  He considers the demise of the beautifully designed book ticket and colour printed boarding cards of individual airlines to be sad.  He fears the Flybe boarding cards to be placed in his files, will fade unlike those saved from some 50 years ago! 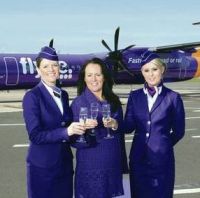 Sat in any window seat for the flight from Exeter to London City, there being little or no cloud, passengers were able to look down upon the M25 south of the Thames.

A few minutes later as the plane turned to face west for landing, they were able to view the traffic emerging northwards from the Dartford tunnel as well as the southbound vehicles attempting to cross the bridge.  At 07:15 in the morning there were lengthy queues in both directions on that M25.  The slogan, painted on the engine cover in front of Michael, seated in 16A, immediately came to life, “Faster than rail or road”.  He was happy to be aboard the Q400 Dash 8 aircraft registration G-FLBE.  The block time for the flight was 52 minutes.  The flying time for the 154 miles (OAG figure) from brake release at Exeter to touch down at London City Airport was but only 47 minutes.

The hospitality and welcome was more than to be expected.  Michael noted that at Exeter and London City, on the three occasions that he showed the boarding card and ID, (Flybe accept any reasonable photographic ID not demanding a passport), the staff addressed each passenger by name and not simply sir or madam.  What horrified the well-seasoned flyer was the number of people who appeared to take no notice of the safety instructions given aboard the aircraft, in spite of a polite request on each occasion by the Captain that all listen to the crew.  Michael witnessed a number of occasions when fellow passengers had to be asked to take off their ear phones, switch off their mobiles, put up their tables and put down their arm rests.  He was somewhat surprised, for the majority of fellow travellers appeared to be from the world of Business, most wearing suits, collar and ties (and of course – trousers!). 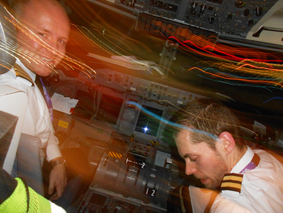 After arrival at London City Airport, Michael spent the morning flying to and from Edinburgh and then after a rest was booked for a return trip to Dublin.  Though our “eccentric globetrotter” was confident that he could have managed de-planing, checking in and re-boarding within the 30-minute turnaround time at both Edinburgh and Dublin, he was very grateful, for two reasons, that permission had been given for him to stay aboard the aircraft.  First that he was to be saved any hassle, especially at Dublin where he had been informed he would have to pass through Passport Control.  Second, and more importantly, because Michael was able to witness the speed at which the aircraft was checked, cleaned and tidied in readiness for the on-coming passengers. The crew certainly had to make great effort to ensure that everything would be presentable in the short time available.  There was hardly enough time to take the photograph below.

Brother Michael noted that both the Flybe aircraft aboard which he flew, similar to the seating plan of Concorde, were without a row 13. He wonders why?  Most airlines around the world provide row 13.  Are more people in the business world superstitious than the tourist trade – Surely not? 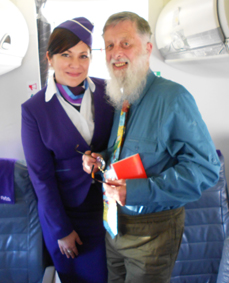 Thanks go to Flybe for a wonderful day’s travel.  For Flight BE 1301 Exeter to London City, to Captain Bernard George and his First Officer, and their cabin crew; Connie and Laura.  For Flights BE 1332/3 London City to Edinburgh and return, to Captain Robert Perry and his First Officer, and their cabin crew, Brook and Connie.  For Flights BE 1317/8 London City to Dublin and return, to Captain Gary Boyle and his First Officer Ian Johnstone, who took special interest in Michael’s globe-trotting, and their cabin crew Jane and Jill.  At the end of each flight, part of James Brown’s song, “I feel good” was played to the passengers, the airline boasting its early arrival.  THANKS for the hospitality, punctuality and of course the safe travel must go to everyone at Flybe, to all ground staff as well as the air crews.

The “eccentric inveterate globetrotter extraordinary”, walked out of the London City Airport terminal just before 21:00 remembering the wonderful views he had enjoyed from beneath the wings of the Quiet Dash 8 aircraft throughout the day, which included firework displays he had spotted just before the final landing on Runway 27/09 – asking himself the question:

“Why did the cashier of Boots Chemist, in the terminal building, need to see his boarding card when he wanted to purchase a 500 ml bottle of water?”

Does anybody know the answer?