Wi-fi speeds on Virgin Trains are to be four times faster while travelling at 125mph thanks to an overhaul of the on-board technology. 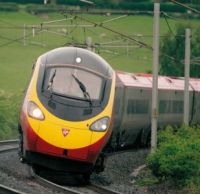 A contract signed last week with Nomad Digital will see the West Coast operator’s entire train fleet installed with upgraded wi-fi equipment which can transmit up to 12MBPS. Work is due to start later this year and will be completed next summer.

Discussions with Network Rail are continuing over trackside infrastructure which would allow connections to be even quicker.

A separate programme will also see superfast broadband with speeds of between 80MBPS and 100MBPS installed at all 17 stations Virgin Trains manages by summer 2015.

The upgrades have progressed as a result of a three-year deal signed with the Department for Transport in June under which Virgin Trains promised a number of service improvements.

Virgin Trains was the one of the first UK rail operator to install on-board wi-fi to its entire fleet but its popularity has meant it now struggles with the increased demand.

The routers will initially use 3G signal from existing masts alongside the West Coast Main Line. However, they are 4G-ready, ensuring that they will be able to transmit superfast wi-fi onboard once the rollout of new trackside infrastructure by Network Rail is complete.   www.virgintrains.com