Declan Collier, Chief Executive of London City Airport, is the Guest of Honour of the Aviation Club of the United Kingdom on Wednesday 22 October. Once again the venue is the Institute of Directors in Pall Mall. 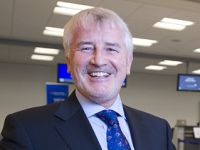 Award winning London City was established in 1987 and is a great success story with nearly 4m passengers expected to pass through in 2014. It serves around 40 airports in Europe plus JFK New York. It has been a prime motivator in the regeneration of the London docklands including Canary Wharf and the Excel complex.

Mr Collier is expected to discuss the future of the airport which welcomes Flybe as a major new operator just a few days after the talk. Planning approval has been gained for major work which could double the airport throughput over the next decade. The airport is owned by GIP, who also has a controlling interest in both Edinburgh and Gatwick airports.  www.aviation-club.org.uk