As part of its “Hollywood. Without the drama” advertising campaign Delta last week rolled out the red carpet to showcase its product and entertainment offerings with a specially-constructed pavilion at Jubilee Plaza, outside Canary Wharf Station.  A giant screen highlighted some of the 250 movies on-board Delta flights through a series of vignettes.

“London is a key market for Delta and activations such as this Hollywood theme help to bring to life the Delta flight experience and popular destinations we serve with both corporate and leisure travellers,” said Frank Jahangir, Delta’s VP of Sales, Europe, Middle East and Africa.  “We have invested heavily in our on-board products, including our in-flight entertainment and fully flat-bed seats in the premium cabin. This promotion allows us to communicate these improvements in a fun and creative way.”

Los Angeles will be Delta’s seventh destination from London to the US.  The airline also flies to Atlanta, Boston, Detroit, Minneapolis-St Paul, New York-JFK and Seattle.   www.delta.com 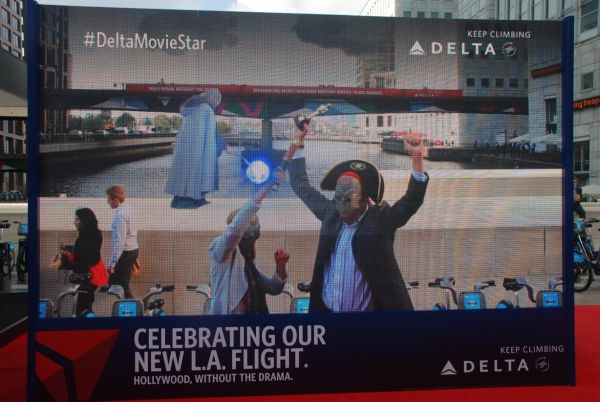