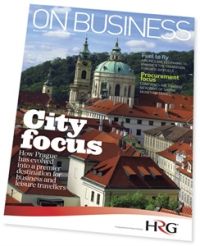 HOGG ROBINSON GROUP (HRG) has unveiled its six month hotel survey noting that corporates continue to consolidate their travel policies and negotiate more favourable corporate deals.  Moscow once again tops the chart as the most expensive destination for business travellers.  However, for the first time since the city entered the HRG survey in 2005, the rate saw a year on year decline (-14%).  Abu Dhabi is now in second place and is the only city in the survey to have achieved average rate growth of 5% in real terms when measured in local currency.  London has seen a 4% decline in average rate in the first six months of 2009, down from the 3% growth over the same period last year.  Average rates increased in the Americas by 15% and rose marginally in Western Europe thanks to the strength of the US Dollar and Euro against the Pound.  However Sterling’s recent gain in strength will help travellers from the UK. www.hrgworldwide.com