The intense rivalry between Etihad Airways and Qatar Airways, and respective Chief Executives James Hogan and Akbar al Baker, continued last week as the Abu Dhabi (Etihad) airline rolled out its lead A380 at the Airbus Toulouse plant  just a week after Qatar did the same.  The competition is likely to be continued at Heathrow shortly where again Etihad will follow Qatar, this time at T4.

Whilst both airlines have their A380s kitted out to the highest standard Etihad also offers what it calls The Residence, which features a living room, separate double bedroom and en-suite shower room, making it the first three-room luxury suite in the history of commercial aviation.

Etihad, the national airline of the United Arab Emirates (UAE), took the Toulouse opportunity of unveiling a new livery design which will be introduced across its fleet.

Created by brand consultants Landor Associates (who also designed the short-lived BA ethnic tail fins) the new livery is inspired by traditional Emirati design patterns, the landscapes of the desert and the geometric shapes found in the modern architecture of Abu Dhabi.  The UAE national emblem is given prominence along the fuselage next to the Etihad name and the national flag is respectfully featured forward near the cockpit.   www.qatarairways.com    www.etihad.com 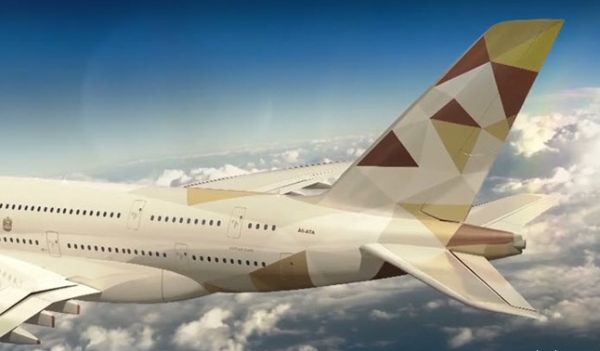