Geoffrey Perry has passed away aged 92.  Perry Publications was the long-time publisher of Business Traveller magazine building it up over the years together with his son Nick, eventually selling out to the present owners Panacea.  But he had a secret. 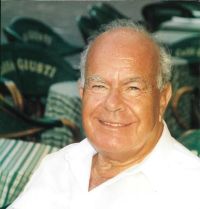 In a long and successful publishing career he was Managing Director of Thomson Magazines and the founder of Family Circle, sold at supermarket checkouts.

To meet the always jovial Geoff one thought of him as a typical former British public schoolboy, which he was (Buxton College).  But in fact he was born in Germany escaping the Nazi regime with his brother Peter in 1936.  He was commissioned into the British Army Pioneer Corp 1943, his perfect German ideal for interrogating prisoners as the allies moved forward later the next year.

His real claim to fame was the capture, with a colleague, of William Joyce, Lord Haw Haw, the fascist collaborator, when tasked as part of the special ‘TForce’ to seize the Hamburg radio station from where Joyce broadcast.  Due to the army politics of the time he never received any official acknowledgement.  Horst Pinschewer had long become Geoffrey Perry.  His wife Helen predeceased him in 2001.  Nick Perry is a successful publisher in his own right, his brother Stephen working in South Africa.