Whilst some of the headlines shout out “Ryanair for the North Atlantic”, that is not going to happen, not at least for five years, according to newly appointed marketing chief Kenny Jacobs.  With well over 150 new Boeing 737-800 NGs still to arrive, and the first of the MAXs in 2019 the airline has more than enough to concentrate on before tackling a “not proven” long haul low-cost area. 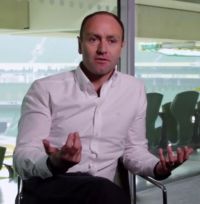 Ryanair also owns 29% of Aer Lingus and this is up for sale “at the right price” according to Jacobs.  Aer Lingus controls 25 pairs of daily slots at Heathrow, which adds to its value.

Speaking at the Low Fares Conference (see ON TOUR) Jacobs confirmed that the airline’s new Boeing 737 MAX would have 197 seats, Boeing in fact suggesting a possible 200.  The extra eight seats above those in the current -800 series come about with much improved thinner and lighter offerings and a rearrangement at the rear of the aircraft where the pair of toilets will be moved to be against the rear bulkhead and the galley realigned.

Mr Jacobs sees Cyprus as an ideal location for a low-cost East Mediterranean airline.  If Ryanair does not win Cyprus Airways (see BTN 25 August) it will consider setting up an independent carrier on the island. www.ryanair.com