After halting the programme on 29 May when a Pratt & Whitney engine experienced total failure and fire during ground testing at Mirabel, damaging one of the four test aircraft, a Bombardier CSeries development aircraft has taken to the sky again.  CSeries FTV2 (second flight-test vehicle) returned to the air on Sunday 7 September with a 35-minute flight around Mirabel, where the final assembly for the aircraft and the engines will be undertaken.

Benoit Poirier, an analyst with Montreal’s Desjardins Securities, said that the resumption could spark renewed interest in the airliner in development.  About 330 hours of flight tests have been completed so far, about 14% of the 2,400 hours required for the programme.

The order book stands at about 200 with airlines sitting on the fence and waiting to learn of a firm delivery date. Bombardier is still speaking about the end of 2015 for the first aircraft.

The CSeries sits between the Boeing 737 series and the Airbus A320 family, and the  Embraer 195 regional jet. Bombardier expects the CSeries to burn 20% less fuel per trip than these competitors.   www.bombardier.com/en/aerospace.html 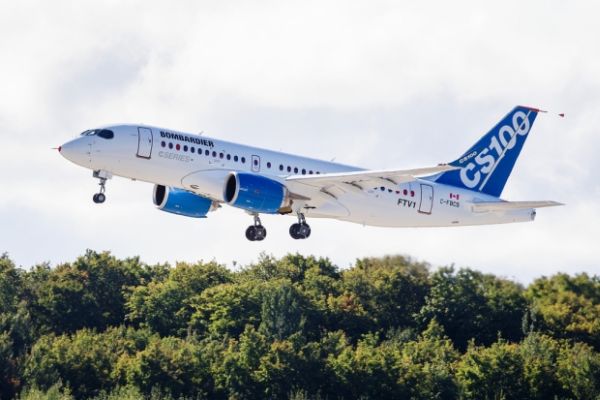