Gatwick Airport gave the return of Garuda, the Indonesian state carrier and Skyteam member, a rousing arrival when the Jakarta-based airline landed at the South London airport last week.  Operating initially five times per week (except Tuesday and Thursday) via Amsterdam the airline gave the broadest hint that by next summer it may well be flying non-stop to Jakarta, at around 15 hours easily the longest ex-UK route.  In the meantime the Gatwick – Amsterdam sector is on sale for First and Business Class, perhaps the world’s most luxurious short haul operation. No.1 Traveller comes as part of the package. 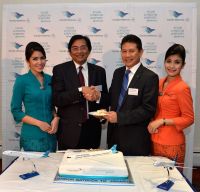 In March 2014, Garuda Indonesia joined SkyTeam, the global airline alliance with 20 members, providing access to an extensive global network with over 15,700 daily flights to 1,064 destinations in 178 countries.

Indonesia is an increasingly important market for the UK.  Bi-lateral trade is growing and, during Prime Minister David Cameron’s last visit to Indonesia, a partnership commitment to double trade (goods and services) by 2015 to £4.4bn was announced.  This new route will support business activities between the two countries and help meet that bi-lateral trade commitment.  www.garuda-indonesia.com