Based in Dar es Salaam (Tanzania), Fastjet, claimed to be Africa’s first budget airline, is to launch a route between its hub at Julius Nyerere International Airport and the Ugandan capital Entebbe. 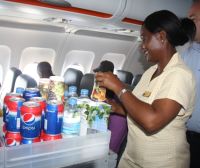 Flights are planned to commence on Tuesday 16 September and will operate on Tuesdays and Thursdays increasing to four flights a week from the 29 September.  Fastjet will be the only airline on the route.

In another move the airline has introduced a premium fare, or 'SmartClass', on all its flights.  By upgrading to SmartClass, passengers will enjoy an advance premium seat allocation, increased baggage allowance of up to 32kg, and the ability to change flight dates as many times as required at no additional cost.