Later this week the Donegal Food Festival takes place.  Perhaps we have given you too little warning.   But as the Irish say “not to worry”.  Anytime is a good time for dining out in Donegal.  Irish hospitality is all year round in a delightful little market town sitting on the River Eske and dominated by its ancient castle.

With the best will in the world it is true to say that County Donegal, and the town that it is named after, are not the most accessible places in Ireland. 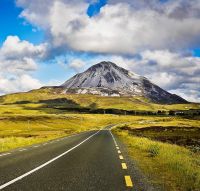 In the far north west, sitting on the Atlantic coast and braced by the Gulf Stream, Donegal features dramatic coastlines and magnificent scenery.  You can drive for mile after mile (on the left) without seeing another vehicle, the currency is the Euro (Sterling notes happily received), and whilst most people can multi-task when is comes to miles or kilometres (the official distance measurement) it is the traditional way that is generally used.

For the visit to Donegal the choice was West of Ireland Airport (NOC), once known as Knock, and effectively founded by following a long and controversial campaign by Monsignor James Horan, a local priest.  In 2013 nearly 700,000 passengers passed through the simple but effective terminal.  I flew on the daily Aer Lingus service from Gatwick, low-cost but very pleasant.  Ryanair comes in from East Midlands, Liverpool, Luton and Stansted all year round as does Flybe from Birmingham and Manchester.  In the summer there are both scheduled and charter flights to and from a number of European points.  The airport is running out of apron stands, which should be sorted out for next summer.  The single runway (virtually at sea level – it was built in a bog) is 2,340m long and 747 capable.

From NOC to Donegal is about 80 miles and 1½ hours.  It is a very easy drive with plenty of hostelries along the route.  An alternative, Donegal (County) Airport is located at Carrickfinn 50 miles north of Donegal town itself with a twice daily service to Dublin and daily Glasgow.  Both Belfast International and Dublin airports are very long drives, 230 and 150 miles respectively.

Where to stay?  The choice was easy.  Lough Eske Castle is a mock Elizabethan style property in a secluded lakeside estate setting just outside the town, award winning and 5-star.  Whilst for the most part actually built in the latter part of the 19th century, Lough Eske has a rich history dating back to the 1400s being associated with the O'Donnell Clan, the founding fathers of Donegal.  In 1939 a fire destroyed much of the building and it was not until the 1980s that local investors, appreciating the potential of the site, began the painstaking task of turning what was essentially a ruin into what is now a truly 21st century country mansion hotel.

A sensational three metre high central fountain at the main entrance to the castle featuring seven leaping salmon was created especially for Lough Eske castle by Lloyd Le Blanc at his foundry in Leicestershire (England). Other bronze sculptures surround the castle and smaller pieces are exhibited in the public areas inside the hotel. 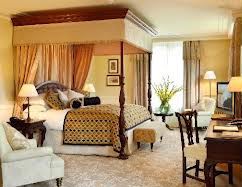 All the accommodation is generous, either in the main building or in what is known as the Garden Suites.  In any event you get a 32” TV, free wi-fi and an en-suite bathroom with separate bath and shower, and double basins.  The rooms are lavishly furnished.  The public areas have an Edwardian aura about them with rich tapestries and a large fireplace in the main lounge.

There is a fine indoor swimming pool and for those who require pampering an extensive spa with a range of treatments available.  It is not exclusive to hotel guests and clearly popular with local ‘club’ members.  A fitness centre is part of the spa.  There are separate conference facilities.  If you want the place for an exclusive private function prices start from €10k per night inclusive of all the 94 bedrooms.  Food is of course extra and no doubt you will get a large bar bill as well.  The massive Presidential Suite alone would cost the same in certain places.

This is an historic building set in a storybook location delivering superior hospitality and comfort.

Many people travel to Donegal for the superb golf – long sandy beaches and extensive dune systems are a feature of the county, and many links courses have been developed.  Glashedy is ranked sixth in a recent survey taken by Golf Digest on the best courses in Ireland.  Just outside Donegal Town and overlooking the bay is Murvagh, a long course by any standards, at 7,300 yards.  It can be a bit draughty at times. 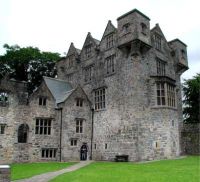 Donegal Castle was built by the O’Donnell chieftain in the 15th century, beside the River Eske.  The Castle is furnished throughout and includes Persian rugs and French tapestries.  Park near the Tourist Bureau where there is a mass of literature of places to visit and very helpful staff.

Just nearby is the wharf for the 160-seater Donegal Bay Waterbus complete with a crew who consider themselves entertainers.  It is all good fun.  A 90-minute trip takes you out to the seal colony whilst a distinctive commentary tells you all about the Bluestack Mountains and what was the leaving point for America.  A one way passage 150 years ago cost just £2.

We dined at the busy Harbour Restaurant.  Steaks and locally caught seafood.  Excellent.

What to do depends on how much time you have.  Glencolmcille Folk Village offers a unique insight into the past.  The tour of the museum, depicts Irish living conditions back as far as the 1700s.  www.glenfolkvillage.com.   Studio Donegal is a hand-weaving and clothing manufacturing business committed to preserving and promoting the original hand-weaving skills passed down from generation to generation in the remote mountainous region of South-West Donegal. Killybegs is Ireland’s premier commercial fishing port suffering from EU rules which means you will find many boats tied up.  Take a stroll along the six heritage walks or drop in to see the simulator at the Killybegs international Carpet Making and Fishing Centre.

Discover the many delights as you walk on the verge of the mighty Atlantic Ocean.  The Sliabh Liag cliffs themselves are the highest marine cliffs in Europe, with sheer cliff face stretching straight down to the wild waves below.

Donegal is a bracing experience.  It never really gets cold, but not too hot either.  And it is well worth the journey.