Zimbabwe is the latest target of fastjet, the African low-cost airline which began operations in November 2012.  The airline will launch a twice weekly operation (Tuesday and Saturday) from its Dar es Salaam centre of operations to Harare from 5 August.

The announcement marks the third international route for fastjet which already flies from Tanzania to Zambia and South Africa.  The airline currently operates three Airbus A319 aircraft. 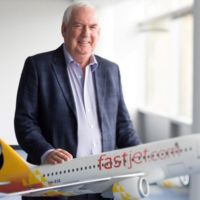 Despite strong commercial and cultural ties between the two cities, there is currently no direct air link between Dar es Salaam and Harare.  The port at Dar es Salaam is used extensively by Zimbabwean traders and in the other direction Victoria Falls is a popular tourist destination.

Commenting on the launch, Ed Winter, Interim Executive Chairman and Chief Executive, fastjet, said: “When we began low-cost operations 18 months ago, we promised the people of Africa that we would democratise air travel across the continent and we are well on our way to achieving that.  We now look forward to offering fastjet’s service of affordable, high-quality air travel to the people of Zimbabwe.”

Since its inception the airline has carried over 635,000 passengers through its domestic network in Tanzania and internationally to Johannesburg and Lusaka.  www.fastjet.com