A group of more than 100 delayed air passengers who came together on Facebook have finally received a pay-out of €600 each from air carrier Virgin Atlantic, prompted by last month’s landmark Huzar ruling at the Court of Appeal, in total over €600k. 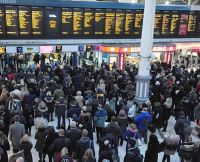 Passengers from the flight contacted the CAA for advice on their rights.  They were first told they had a valid claim under Regulation EU261 but a few days later the CAA sent another letter to say there had been a mistake and their flight did not qualify for compensation.  This advice was incorrect.

Travellers on board Virgin flight VS16 on 27 October 2012 were scheduled to depart from Orlando at 19:35 but were delayed by 26hrs.

Last month Court of Appeal judges handed down their judgment in the Huzar v Jet2.com case, finding that a technical problem is not considered an extraordinary circumstance and therefore cannot be used to avoid paying flight delay compensation under the terms of EU Regulation 261.  The court’s decision prompted Virgin to pay out on the VS16 flight.  No mention has been made of the legal costs.