Will this BBC plug for BA go down as an award winning documentary?  Unlikely.  But it ought to be a must in the future for airline recruits exploring as it does the complexity of the operation. 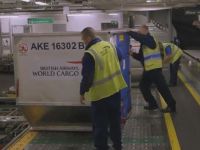 In the final episode we were in the company's main control room with Operations Manager, and rugby enthusiast, Kevin McKenzie.  He revealed how the airline manages the challenges of operating out of the world's most congested airport, and deals with the knock-on effects of some passengers actions – from panic attacks before take-off to suspicious items discovered in luggage.

We followed the training of the airline's first intake of cadet pilots since the downturn in air travel after 9/11 – with each trainee having to pay (future salary deductable) £84,000 for the 18-month course.  Failure could be expensive.

And through some of the company's 40,000 staff, including ex-Harrods Manager David Page, the BBC explored what makes BA such “A Very British Airline”.  The Executive Producer was Nick Catliff and Series Director James Rogan.  No BA personalities for this episode.  www.bbc.co.uk/programmes/p01yyhgg