Indian airline IndiGo has introduced a stair lift for passengers suffering from reduced mobility at the Indian airports which do not have an air bridge facility.

This novel, but practical, facility, could quickly catch on world-wide, and become the norm.  The airline is to be praised for its initiative. IndiGo enjoys the solitary status of being the only airline anywhere on the globe having this boarding ramp facility for all its flights. 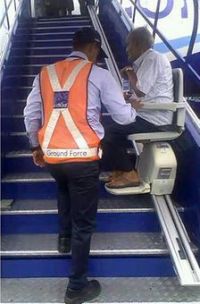 The airline says that it had been considering the existing airline facilities, operations and procedures regarding non-ambulatory travellers.  The maximum allowed number of passengers having severe reduced mobility per flight is limited to four.  Wheelchairs using a jetway (airbridge) can get right inside the aircraft without hassle. With more basic aircraft the only previous way possible was to physically manhandle travellers with disability, not a very satisfactory procedure.  Vin Grace, an Indian company specializing in equipment for people with special needs, developed the lift.

IndiGo was founded in 2006 and is India’s fastest growing airline with just over 30% of the domestic market.  It has made steady profits and is currently an exclusive Airbus A320 operator (78) with a large number of A320 neo series aircraft on order.   https://book.goindigo.in