Haynes Publishing, one of the longest established (1960) and most respected specialists in motoring technical books, has introduced its latest production (and timed to coincide with the opening of The Queen’s Building Terminal 2).  Called “Heathrow Airport 1929 onwards Operations Manual” a weird title for what is a very fine production.  One does not have to wonder where they got the word “Manual”. 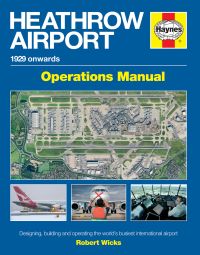 Author Robert Wicks has done an excellent job in putting together a well-illustrated book but if you want a real history of RAF Heath Row, and the politics of how it became London’s major post war international airport there are other more accurate sources.  The 1944 original layout is still more or less the same today.  The third runway was thought of even then and Sipson targeted!

In its 10 chapters the “Operations Manual” covers its title, with British Airways (which is after all 50%+ of traffic) gaining a fine section all to itself, as does cargo, security, air traffic and each of the various operations that together make up London’s air transport hub.

Even in the short time since it was printed, the final chapter “The future of Heathrow” is dated.  The acronyms and glossary listed should be on every newsdesk wall.  A great Christmas present for buffs.   www.haynes.co.uk/heathrow