Last week marked an important milestone for Flybe, the airline returning to profit, announcing a rebranding project and opening up new routes.

Under the shrewd management of Saad Hammad, formerly with easyJet, the airline turned a profit of £8.1m for the year, after losses of £41.1m in 2012-13.  He said that Flybe was still in talks with a number of European flag carriers to expand its "white label" business – flying its planes for other carriers – which has performed well with Finnair, operating 22 regional routes into the Helsinki hub.

Flybe marked the mood change with the inaugural flight of its distinctive purple Bombardier Q400 aircraft.  The plane took to the skies on its first passenger flight between Exeter and Manchester, with cabin crew uniforms and even the on-board mood lighting sporting the new colour.  The new look is set to be rolled out across Flybe’s entire fleet in the coming months.

A new daily route was announced, from Southampton to Hamburg starting in October.

At Southend, Stobart Air, operating as a Flybe franchise, opened up routes to Rennes, Münster and Groningen, with Antwerp, Caen and Maastricht to come into operation in early July.    www.flybe.com 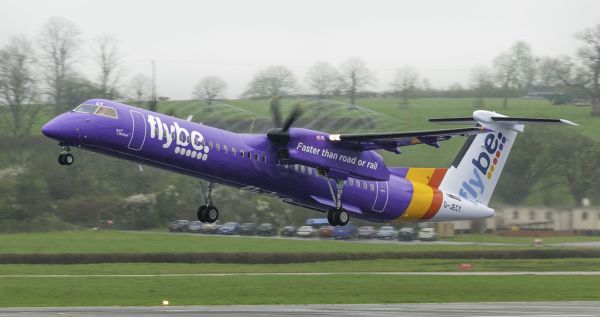