You can now fly direct between Amsterdam and Jakarta.  Previously services were via Singapore (KLM) or Abu Dhabi (Garuda).  Now the Indonesian airline has introduced a three-class Boeing 777-300ER with a flight time of around 14hrs, one of the world’s longest non-stop services. 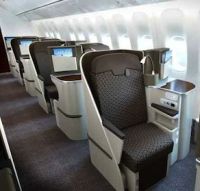 Emirsyah Satar, President & CEO of Garuda Indonesia, commented that the initial Jakarta – Amsterdam non-stop service is also aligned with Garuda’s entry into the SkyTeam global alliance on 5 March 2014.  "Following Garuda’s official joining of the SkyTeam, the opportunities presented by the established SkyTeam hub at Amsterdam are too significant to pass up, as it will be an alternative gateway for passengers who wish to travel beyond Europe.  They will be able to choose from 1,064 destinations in 178 countries served by the SkyTeam member airlines.”

On 8 September the route will be extended to Gatwick using the same aircraft.  The airline has traffic rights between London and Amsterdam and travellers can book this short leg, or get off at Amsterdam and continue to London later.
www.garuda-indonesia.com