Zurich is the latest target of Cathay Pacific Airways.  Tickets are already on sale for a new service that is scheduled to commence as a daily operation from 29 March 2015. 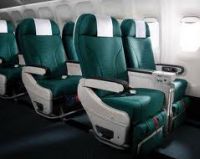 The Zurich service will be operated by a Boeing 777-300ER aircraft in a four-class configuration featuring a refreshed First Class, award-winning Business Class and long haul Economy Class seats.  Due to be launched later this year, the airline’s new Premium Economy cabin will also be featured.  (See BTN 14 October 2013)

Cathay already serves Amsterdam, London, Milan, Moscow, Paris and Rome in Europe.  A four times per week service to Manchester was recently announced and is due to start in December using a similarly configured aircraft.  www.cathaypacific.com