Richard Tams, currently Head of UK & Ireland Sales and Marketing at British Airways, is to move East as Executive Vice President China and the Philippines for the airline.  The new role will include representing BA and parent company IAG in China. 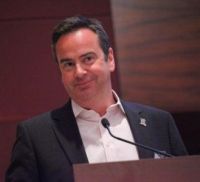 Drew Crawley, Chief Commercial Officer, British Airways, said: “This appointment reflects the importance of this hugely strategic market for British Airways and marks the start of further investment in the region.”

Since he began his career with British Airways as a graduate trainee 23 years ago Richard has worked in a variety of operational and commercial roles across both the passenger and cargo divisions of the business and in a number of markets around the world.  These include South Korea, the USA, Canada, Scandinavia, the Netherlands and the Baltic states.

In January 2009 he took on his current role and became responsible for BA and Iberia’s relationships with its UK and global corporate customers, travel management companies, partner leisure agents and tour operators.

Mr Tams role at BA, is being advertised internally and externally.  Richard will be based in Beijing and will take up his new position when British Airways has appointed his successor.  www.ba.com