China Airlines to get Skycouch 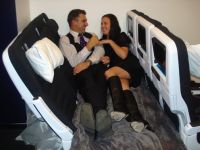 Air New Zealand has signed a licensing agreement with China Airlines for its Economy Skycouch seat.

Under the terms of the agreement, China Airlines will commence the introduction of the Skycouch to its fleet of new Boeing 777-300ERs from September this year.

The Skycouch is a row of three economy seats that together adapt to create a flat flexible space to stretch out and relax in.  It was developed as part of a three year innovation process to re-invent the long haul flying experience.

"The Skycouch has transformed the Economy flying experience and has been really well received by our customers since it was first introduced in 2011.  We have seen strong interest from other airlines in the product and are exploring licensing agreements with other carriers on non-competing routes," says Mr Luxon.

This is the first licensing agreement for the Skycouch following the expiry of the exclusivity period the airline adopted at the launch of the product in 2011.  The deal was originally announced in November but confidentiality terms in the agreement have prevented Air New Zealand naming the carrier until now. www.anz.com www.china-airlines.com