They Don’t Come More Sensible Than This! 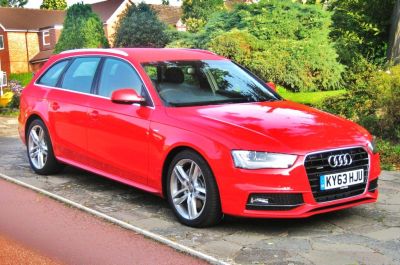 Why do you need a big 4x4?  I have raised that question so many times and invariably the answer involves a challenging road system close to the driver’s home, perhaps a hill or some tight winding lanes that makes he or she think big is best.

So for probably most of the year they are occupying a lot of road space unnecessarily and probably have a problem when they confront another large 4x4 coming in the opposite direction on a narrow road already obstructed by parked vehicles.

Thus I argue the case for a sensible AWD car like the Audi A4 Avant quattro (AWD) powered by the range-topping 3.0-litre V6 turbo diesel engine.

It is just one of a whole variety of AWD variants offered in the extensive Audi range and to my way of thinking it is sized about right for those tight driving situations and with the flexible power (all 242 bhp of it) to tackle most of the challenges on the road.  There are also some other Audi AWD offerings set up to cope with moderate off-road situations as well as the really seriously challenging stuff.

The A4 Avant’s estate type body design provides capacity for five adults in a very high level of comfort plus reasonable luggage capacity – increased of course by the 60/40 split folding rear seat facility and by the fitted roof rails ready to take a rack or a ski box.

Add a 7-speed seamless changing automatic (and selectable) transmission to the package and the result is an immensely capable machine that is a delight to experience.  The sheer capability of the vehicle is clearly designed for purpose.

My earlier test of a 2-litre turbocharged Quattro version suggested that the driver could take it for granted.

The same driving character applies to this larger engined example, the AWD system, proven over about 40 years, efficiently dealing with the demands of the prevailing road/track surface in such an efficient manner with minimal driver effort.

This V6 diesel unit is probably one of the most refined oil burning examples currently available, getting the job done with hardly a murmur while delivering a claimed top speed of 155 mph and able to reach 62 mph (100 kph) from rest in a mere 8.2 seconds.  That is fast and it is also pretty frugal, the official combined figure is 47.9 mpg though, with the help of the responsive start+stop system, one should see over the 42 mpg mark on mixed driving conditions.

There is easy entry to the generous sized and very supportive driving seat that provides a good range of adjustment.  Thus I easily achieved a comfortable driving position though I noticed that there is a slight support bias towards the left.  Pedal positioning is excellent and the steering column is fully adjustable.  Vision is also pretty clear in most angles.

The fascia presentation on any Audi product always delights me – businesslike, immaculate, comprehensive and contained in stylish mouldings made from quality materials.  It is a scene that, to me, generates an appreciative and relaxed mood.

That this car is such a competent handling machine with bags of performance means that it can be appreciated by all types of driver – from the laid back to the discerning expert keen to optimise the responsive handling, the impressive grip, the immense stability, and the lightness of the controls including the confidence inspiring braking system.

The overall size is just about right, the interior reasonably roomy, the comfort provided by the leather upholstered seating (heated at the front) suitable for long journeys with minimal fatigue and the basic equipment package fairly compressive though Audi buyers invariably draw on an extensive options menu when ordering their car.

Thus this test car came with the leather/Alcantera upholstery, powered/heated front seats, an extensive technology package (satellite navigation and, music interface and parking system, adaptive headlights, a towing hitch, mobile phone preparation and a few more bits adding up to another £7,000 on the list price.  A space saver spare wheel, I note is standard.

Snow and ice did not materialise on this test exercise though I have experienced Audi’s quattro AWD systems under such conditions and appreciate the capabilities, especially when dealing with the sudden confrontation of mud on the road.  The Avant body design (all metal parts are galvanised for long life) is versatile (including metal roof rails) and is sufficiently compact for easy parking and is that bit narrower than most off-roaders.

This is a big week for the motor industry with the 2013 results published and the North American International Auto Show (NAIAS) opening to the press today (13 January) with a large number of announcements, every manufacturer and supplier trying to get media attention.  Held at the Cobo Centre, Detroit, Mitchigan, it does prove that there is still life in Motown. www.naias.com


UK 2013 motor sales
Figures published by the UK Society of Motor Manufacturers and Traders (SMMT) confirm that 2,264,737 cars were registered last year, up 10.8% on 2012.  This is the highest annual total since 2007 and represents a rise in 22 consecutive months. Worldwide, luxury manufacturer Jaguar-Land Rover sold an astonishing 425,000 vehicles.

The UK is firmly secured as Europe's second largest car market and is the only one to grow consistently throughout the year.  The 2014 market is expected to stabilise with sustainable growth of around 1% over the year.


Flood driving
Business Travel News likes to be up to date with current events even if they are not to our palette.

With the current very rainy season, breakdown cover specialist GEM Motoring Assist has produced a short video with simple advice for drivers on staying safe on wet and flooded roads.  If you are living in an area with water problems you have probably learnt to live with it by now, but if you are visiting this little film is well worthwhile a quick look at.  www.motoringassist.com


Nissan LEAF electric sales
In marked contrast to overall sales the UK market for electric cars is slow.  It is early days yet.  Nissan is the leader with 141 new registrations in November for the Sunderland-built LEAF which takes total British sales past 3,000.  Nissan’s second generation LEAF, which went on sale in May 2013 with more than 100 improvements on its predecessor, secured more than 1,300 UK sales in just six months.

Jon Pollock, Sales Director at Nissan GB, said: “The LEAF is a true pioneer in every sense and in its lifetime it’s already done a huge amount to change attitudes and open minds in the UK and across the world.  To date, more than 16,000 LEAFs have found owners across Europe, while global sales have now topped an astonishing 87,000. www.nissan.co.uk

Rolls-Royce Motor Cars revealed record sales results for 2013.  Globally during the year, 3,630 cars were sold, which represents the company’s fourth consecutive record.  The result is announced in the 110th year of the marque.

These results confirm the Goodwood-based manufacturer clear position as the world’s leading super-luxury brand.  Strong sales growth was reported across the globe, with notable results seen in the Middle East (up 17%) and China (up 11%). Several countries recorded strong sales performances, including Germany, Japan, Qatar and Canada. www.rolls-roycemotorcars.com www.bentleymotors.com


Range Rover Sport wins
The all-new Range Rover Sport has been voted the UK's number one SUV in the large SUV category by the judges at What Car?  The jurors picked the 3.0-litre SDV6 HSE model as their favourite, rating it ahead of Mazda's CX-5 2.2 Skyactiv-D 150 SE-L and the BMW X3 xDrive20d SE auto.  The latter car has won the award for the past two years.