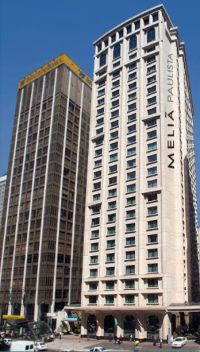 The international hotel groups are rushing in to add to their Brazilian portfolios in time for the World Cup later this year.

Meliá is typical, the company already managing 14 properties in the world’s largest Portuguese speaking country with plans to increase this to more than 20 before the Olympics.

Meliá Paulista is the fifth hotel signed this year in Brazil, a landmark property located on the Avenida Paulista in São Paulo, one of the most important business districts in Latin America.  With its fine position Meliá Paulista Business & Convention Hotel and is expected to raise the profile of Meliá even further in Brazil.

The Meliá Paulista will have 400 suites and apartments plus a contemporary restaurant, bar and gym.  It will also provide seven meeting rooms and three events and conventions rooms, an excellent choice for hosting events in São Paulo.

Besides São Paulo, where Meliá already has a dozen hotels under the TRYP by Wyndham and Meliá brands, the company is also present in Brasilia and Angra dos Reis, and in 2016 – the year of the Brazil Olympics – expects to have several new hotels open in destinations such as Rio de Janeiro, Recife, Belo Horizonte or Pernambuco. www.melia.com