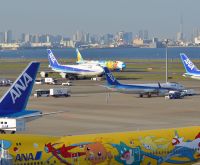 The value of an airport as near as possible to a city centre is being clearly demonstrated with a push by international airlines to return to Tokyo Haneda after their forced Narita encampment in 1978.  In 2010 Haneda, a short monorail ride from central Tokyo, opened a new international terminal and fourth runway.  The Japanese government has since then gradually opened up slots for overseas carriers.

The latest carrier to gain access is Lufthansa whose Frankfurt and Munich flights will move on 30 March.  Lufthansa will partner All Nippon Airways (ANA) with a new Tokyo flight to Dusseldorf.

Simultaneously with Lufthansa, ANA is rearranging and expanding its connections between Japan and Germany at the start of the 2014 summer flight schedules.  The Japanese airline will service Frankfurt in future twice a day from Tokyo-Haneda.

Previously ANA offered in its schedules one flight from Narita and another one from Haneda both to Frankfurt.  The Munich flight also will be serviced out of Haneda in the future.

New in the ANA timetable are flights to Dusseldorf from Tokyo’s Narita Airport, which will be operated by a Boeing 787 from 30 March 2014.  This non-stop route will connect the important Japanese community living in Germany with its home country. www.ana.co.jp  www.lufthansa.com