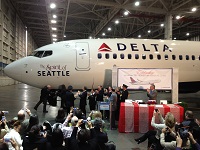 In celebration of its 80th anniversary and growing presence in Seattle, Delta Air Lines has named its latest Boeing 737-900ER aircraft as the 'Spirit of Seattle.'

The aircraft is dedicated to the city of Seattle and the airline's customers, employees and partners in the region.

The dedication took place in a ceremony at Boeing Field, the same location that Northwest Airways began services in Seattle on 3 December, 1933. The airline later became Northwest Airlines and merged with Delta in 2008. That inaugural flight was flown from Spokane to Seattle and back to Spokane on a Waco JTO biplane carrying mail but no passengers. The initial passenger service was a Tacoma-Seattle-Wenatchee-Spokane route using seven-passenger, 120mph Hamilton H47 Metalplanes.