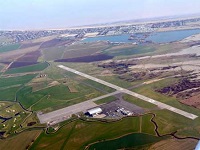 As the Government-appointed Airports Commission, led by Sir Howard Davies, prepares to publish its interim report into how additional runway capacity can be provided to help the UK maintain its status as a global air travel hub, Lydd (also known as London Ashford Airport) has underlined its credentials.

The airport on Romney Marsh in Kent celebrates its 60th anniversary in 2014 and has ambitious plans to build its passenger figures to the levels that once made Lydd Airport one of the busiest in Britain (in 1958 it handled 223,000 passengers, 37,000 more than Gatwick).

The first phase of its £25 million expansion, the construction of a 294m runway extension plus a 150m starter extension, should start early in 2014 and will open the airport up to airlines operating fully-laden Boeing 737-type jets. A new terminal building will follow once passenger numbers grow.

The airport is keen to promote the fact that it can help meet the demand for urgently-needed additional airport capacity in the South East and help ease congestion in the skies. Executive Manager Hani Mutlaq explained: “While building extra runways at places like Gatwick will be hugely expensive and take many years, making full use of smaller modern airports like us makes a lot of sense.”  www.lydd-airport.co.uk