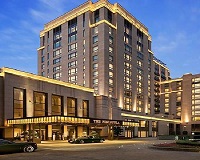 The Peninsula Shanghai has been recognised as the world's top business hotel for the second consecutive year by US-based Travel+Leisure magazine.

This prestigious accolade acknowledges the prominent role of The Peninsula Shanghai in promoting hospitality excellence in China, which is predicted by the Global Business Travel Association to become the world's largest business travel market by 2016.

Joseph W.Y. Chong, General Manager, The Peninsula Shanghai said: “Winning this title proves that the hospitality industry in China can now compete with the very best in the world. It provides us with extra motivation as a team to deliver world-class standards of comfort and service supported by cutting-edge proprietary technology to business travellers in Shanghai, which is the primary financial and commercial centre in Mainland China."

Located on the historic riverside Bund, The Peninsula Shanghai pays homage to Shanghai in the 1920s and 1930s, and recreates the look and feel of this glamorous era when the city was feted as "The Paris of the East".  www.peninsula.com/Shanghai