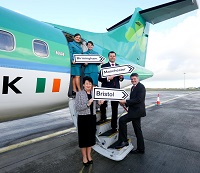 Aer Lingus is set to offer 100,000 new seats across three UK routes in 2014 thanks for a new service and increased frequencies on others.

A new daily service from Bristol to Shannon Airport on the west coast of Ireland was announced on 4 December along with news that flights from Manchester to Shannon will increase from two to three per day and sectors from Birmingham to Shannon will double.  The move should lead to 20 new jobs at the Irish airport.

Aer Lingus Regional, which is operated by Aer Arann, will have 96 UK regional flights a week to and from Shannon next summer and anticipates growing passenger numbers to 240,000 next year and to 250,000 in 2015.

The increase in capacity will also benefit those planning to use Shannon as a stop-over to take advantage of the airport’s ‘preclearance’ advantage.  Shannon is the first airport outside of the Americas to have full preclearance, which avoids the lengthy queues at customs and immigration on arrival in the USA.  British passengers will also see Airport Passenger Duty slashed by up to £50 on transatlantic tickets if they depart from Shannon, where no travel tax applies.  www.aerlingus.com