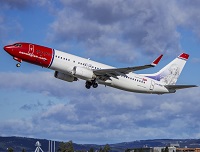 Norwegian Air Shuttle has announced plans to establish a new base in Barcelona, Spain, in spring 2014. This will be Norwegian’s sixth base in Spain, along with those in Madrid, Alicante, Malaga, Las Palmas and Tenerife.

“We have decided to open a new base in Barcelona to meet the demand for non-stop flights to and from Spain’s second largest city and the capital of Catalonia”, said CEO Bjørn Kjos on 28 November.  “Barcelona is one of the world’s most beautiful cities where we already have a major presence, but we also see a major passenger potential ahead.  At the same time, it is strategically important for us to establish a base in Barcelona, as we are considering the airport for future long-haul operations.”

Norwegian will have three new Boeing 737-800s based at Barcelona-El Prat Airport and recruit more than 100 pilots and cabin crew locally.  In addition, it will launch four new routes (to Sandefjord Torp, Hamburg, Berlin and Warsaw) and increase the frequency of existing routes from Barcelona to Stockholm, Helsinki and London as of April 2014.  London-Barcelona flights will now be operated on a daily basis.  www.norwegian.com